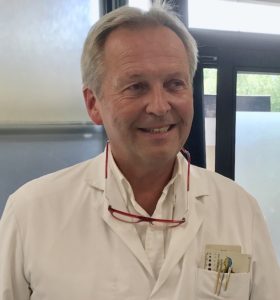 Doctor of Medicine, graduated in 1981 from the Free University of Brussels, he actively participated during his training – internal medicine and pneumology – in the creation of the adult sleep unit at CHU Saint-Pierre (1985).

At the end of the 1990s, given the lack of access to sleep laboratories and patients’ fears about hospitalisation, he developed a telemedicine activity in the field of home sleep studies (SleepMobile.be). Faced with the endemic explosion of Sleep Obstructive Apnea Syndrome (SAOS) and challenged by the prevalence of these disorders in non-obese subjects, he embarked on socio-anthropological research that led him to propose at the end of 2014 an original reeducational treatment aimed at correcting sleep breathing disorders. At the beginning of 2015, it is developing a new concept of networking with health professionals specialising in the management of sleep disorders in both children and adults (SleepClinic.be). At the end of 2017, there is hope that OSA will heal thanks to myofunctional therapy (MFT), whose effectiveness is enhanced by the nocturnal use of TRP.

Paul Wulleman is actively involved in the creation of the Myofunctional Therapy Group (www.gtmf.eu) whose objectives are the training and dissemination of this new rehabilitative approach.

In 2016, he is a consultant for Tongue Lab and participates in research and medical strategy, in particular for the treatment of sleep breathing disorders with the TRP device.